When I collected the results from July’s poll, I was excited to delve into the Fairy Tale, though I didn’t have a single idea what to write about. I thumbed through a search of DeviantArt and found an interesting picture of a woman dressed in white with a shadowy figure behind her left shoulder. By itself, there isn’t a lot to do with that, but I’d recently watched The Emperor’s New Groove, and Kronk’s devil and angel were fresh in my mind. So, despite this inspirational picture not having the moral creature behind the other shoulder, my mind latched upon that concept, and the story unfurled in my mind.

Though shortly after penning the initial thoughts for this piece, my 3D printer decided to work again, and I’ve been making up for lost time with that hobby. But between print jobs, I’ve iterated over the base of the story and flesh out a tale I’m excited about. So, sit back and get comfortable so you can delve into July’s Fairy Tale. 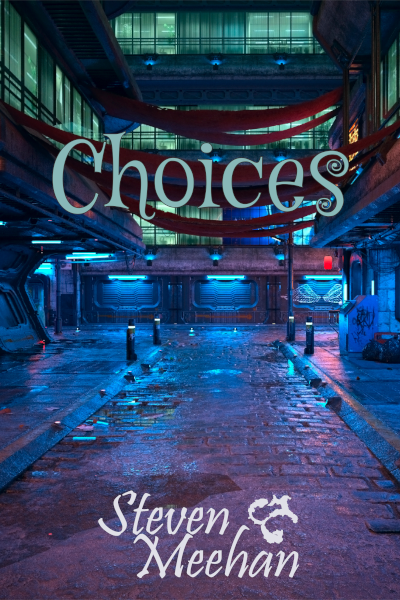 Once upon a time, a young girl peered around the corner of a brick wall as her fingers whitened around the cold bricks of the building. As the owner left his store, her tongue ran across her lip as she inched out of the blind alley, “I’m not sure this is a good idea.”

A small light fluttered against her shoulder, and little feet pranced along her collarbone as her head shook. “Of course, it’s a terrible idea. You know this is wrong, return home.”

“Don’t listen to her, Elizabeth.” A dark being emerged from the building’s shadow and glided in front of the child’s face. The other fairy’s toothy grin widened as she spread her arms. “You’re hungry, and that man’s store is chock full of delicious food to fill your belly.”

“There are other options available to you, Elizabeth.” The silver light enveloping the fairy intensified as the sprite leapt from the girl’s shoulder, fluttering next to the other one. The luminescent creature shoved the figure shrouded in shadows away and darted in front of Elizabeth’s eyes. “You cannot take this first step. If you listen to Cirrus, eventually, you’ll end up seeing someone you don’t recognize whenever you see your reflection.”

The shadow clad being cackled as she flitted about the alley, slowly clapping her tiny hands.

The silver light emanating from the other fairy reddened as her lips turned down.