Wan moonlight bathed a stocky man’s pale arms as he leaned against the metallic rails, whistling a simple tune.

The sporadic notes stopped as Anton twisted his head and pushed against the railing. “Norman, the silence is eerie.” Anton marched across the deck and swatted the console. “Why don’t you have a radio or satellite on this boat?”

“You weren’t hired to be entertained.” Norman released his grip on the yoke and pointed at an indention in the massive frozen cliff. “I enlisted you to assist me with my cargo. Besides, there aren’t many options available when you’re this far removed from civilization.” 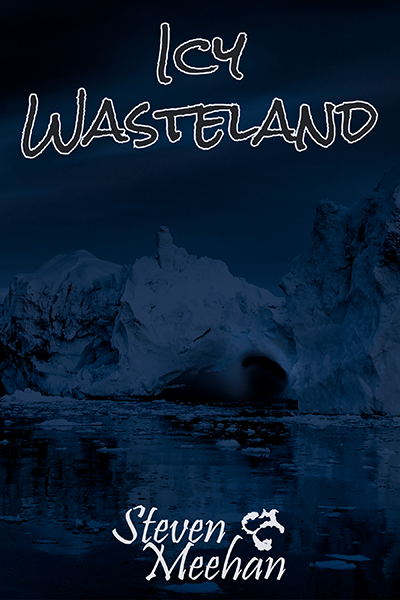 “Whatever, Norman,” Anton said, waving his hand as he sauntered back to the rail, staring at the looming glaciers. “Can you explain why we fled the civilized world?” Anton chewed his lips as he wrapped his fingers around the metal bar. “Specifically, why you are steering us right into a hunk of ice.”

“We’re out here to dump my cargo in my decontamination facility.”

“Out here in a glacier?”

A dark smile spread while Norman throttled the ship’s engine. As the craft approached the icy wall, he spun the wheel, guiding the ship into the gap, plunging them into darkness. “Fortunately, out here the world’s pesky regulations don’t exist.”

Distant howls ripped through the tranquil atmosphere, chasing a shudder down Anton’s spine. With shallow breaths, his whitening fingertips dug into the boat. Closing his eyes, Anton took a few deep breaths and twirled his hand toward the star-filled sky. “It’s creepy navigating through all these massive chunks of ice. With the pale light, those cliff-faces look like giant gravestones.”

Norman turned off the engine and pulled a slender stick from the console. With a crack, a sickly green illumination leapt from the tube, chasing away the darkness. With a series of quick motions, Norman cracked another rod and tossed it on the approaching dock. Norman sauntered to the bow and twisted a section of rope off the cleat. When the vessel crept alongside the small metal wharf, Norman hopped on, securing his craft. “Privacy, is as precious as gold in most cases.”

Anton rubbed his upper arms as his eyes fluttered around the cavern. “I’d figure your location would ensure that. Why didn’t we make this trip during the day?”

Norman cracked another light, intensifying the sickly glow. After tossing the plastic tube onto the deck, he sauntered to the spare pile of rope and lashed the boat to the wharf again. “Haven’t you heard of security in depth?”

Anton pulled a steel ramp from a compartment and hooked it against the gunwale. With a shove, it clanked against the dock, while he grabbed the closest barrel and lifted it into position on the smooth metal. “I can’t say that term sounds familiar.”

Norman eased the drum upon a small dolly. “It is a succinct way of saying you don’t rely on a single form of security. The isolation helps, but when it’s paired with the timing, I ensure my privacy. Remove the other one off my boat.”

Anton dropped the cask onto the steel. “I’m not lazy.” With a sigh, Anton escorted the last barrel down the ramp. “Is that the only cart you have?”

“Leave it there and get the door.” Norman said as the eerie light reflected off his teeth.

Anton chewed his lip as he stomped past Norman and yanked it open. Instantly, a chorus of moans, howls, and wails erupted from the opening. “What’s happening in there?”

Norman stepped up, gripping Anton’s shoulder. “That is the secret of my process.”

Norman swatted Anton’s back and tipped the drum into the void. While the barrel tumbled, Norman grabbed the wheeled cart as a crack silenced the cacophony. He rushed to the other cask and slipped the dolly under it. With a smile, he returned and shoved the second container into the darkness.

As a crash erupted, Anton swallowed a lump in his throat. “What was the cargo?”

With a toothy grin, Norman pulled another stick from his pocket and broke the inner vial. As it tumbled from Norman’s fingers, the green light highlighted the scene below. Anton crept to the edge, discovering a mass of shambling creatures wading through empty barrels heading toward the viscous liquid draining from the fresh ones. While they cupped the fluid to their mouths, Anton inched away. “What are they?”

Norman pressed his palm onto Anton’s back. “They clean the byproducts of my factories, and they work cheaply.”

Anton licked his lips while he studied the creatures pouring the noxious waste down their throats. “How do you pay them?”

“Food,” Norman said as he shoved his assistant.

However, Anton’s hand flew to the doorframe, and he dove under Norman’s arm, rolling behind the lunatic. “You feed them people?”

Maniacal laughter mixed with clangs and thumps, while Norman turned around. “Think about it. Those monsters clean all the waste I bring them, and it only costs me the life of a transient. It’s a fantastic deal once you consider everything.”

As more clanks rang out from the pit, Norman’s wicked laughter intensified. “Nonsense, I’m a businessman.”

With a glance over his shoulder, Anton inched away from the maniac and his pet creatures. “The authorities are going to catch you!”

“There’s a reason I hire people like you.” Norman lifted a ring of keys, jingling them. “Besides, you cannot start the boat without these.”

Misshapen hands reached out of the void, snatching Norman’s ankle, and yanked him into the darkness. As cries of pain roared from the mysterious depths, Anton rushed to the opening, slamming the door. He spun around and slid down the cold steel. With a groan, Anton rubbed his face and bounced his head against the metal. As he climbed to his feet, Anton noticed something glittering on the ground. He lifted the jingling keys and smiled as he rushed to Norman’s boat.