At the conclusion of Empire of Ivory Temeraire and Laurence stood at a moral crossroads, unbeknownst to them the Admiralty of the British Empire had deliberately caused the sickness that had plagued their Arieal Corps to spread to France, and were holding the cure in an effort to decimate the dragons under Napoleon’s control. When Temeraire heard this, he immediately decided to gather some of the medicine from the British stores and take them to France to prevent the potential destruction of the draconic race from Eurasia. With knowledge of his dragon’s desire Laurence needed only a little longer to knowingly commit treason to try and undo a truly horrific act. However after successfully delivering the cure to the French Laurence willingly returns to England to face the consequences of his actions. 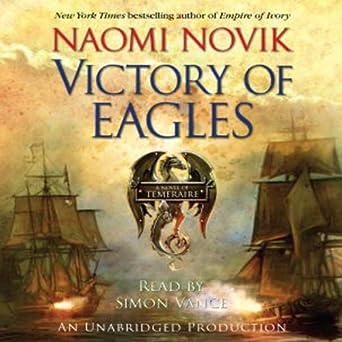 Temeraire successfully leads multiple assaults against some of the French troops, and the leaders of the regular British military seek to give the leader of the victorious militia a field commission. Once they discover that they have given Temeraire the commission they slowly and begrudgingly begin to follow Napoleon’s example bring the aerial corps indeed into the military rather than using them as an afterthought.

With each novel in this series, both Temeraire and Laurence have had dire struggles that they needed to overcome, and Victory of Eagles is no different as each manages to grow after dealing with their own conflicts. Temeraire’s growth in this story revolves around the realization of what their actions from Empire of Ivory had cost both him and Laurence, though he also takes hold of his opportunity to become a true leader of dragons in Brittan, thanks to the rank he had been given. Of course, he has to learn about taking admonition when he does something wrong, which he does try to take to heart. Meanwhile, Laurence is having to reconcile what he did with the feelings he has now that he sees the consequences of having spared the french ariel force. This struggle flows throughout the entire novel, and he has little to lift his spirits as he discovers how hard his nation is being persecuted.

Victory of Eagles is another excellent installment in this Napoleonic era series, and it was fantastic seeing this pair of characters grow and blossom from their deepest depressions.