I remember hearing one time that out of every ten superhero action figures nine of them are Spider-Man. Think about that for a minute the most popular superhero of all time is our friendly neighborhood Spider-Man. And his most iconic villain is Venom, that combination of Eddie Broc and a spurned alien symbiote. The villain certainly challenges the web crawler whenever the two meet, and I remember the last time they tried to bring the hero’s greatest villain to the big screen, Sam Raimi’s Spider-Man 3.

From what I heard after the fact Sam Rami did not want to do the movie with Venom and after hearing that it makes total sense. That rendition of Venom was terrible, and I remember being so disappointed with how he was treated. But that was then, and now we are being treated to a new live-action movie centering around Venom that was released to theaters in the United States on October 5th.

In Marvel’s wider world Venom is not always the villain, in fact, there are times when he is aa anti-hero similar to the Punisher. And they certainly used those arcs when they designed this movie. Now while I cannot speak to how well the film paid tribute to those story arcs, but I can talk to how the movie altered Venom’s origin. There is no Spider-Man in this movie. None. Nada. Zitch. A big old Goose Egg. Now with that being said, Eddie Brock was still a journalist that was disgraced and was ultimately doing it to try and protect people. In fact, that is Eddie Brock’s motivation during the film, his desire to help those who need it.

Now while it was hard to go into the movie knowing that there would be no wall-crawling hero to spurn the symbiote, I am glad I was able to get myself to the theater. There are some shortcomings to the underlying story such as the critical points from the beginning of the movie being discarded halfway through the film. And then there is the way Riot makes his way to the Life Foundation, it is a little deus ex machina for me, but it did its job bringing to the story to its climax. 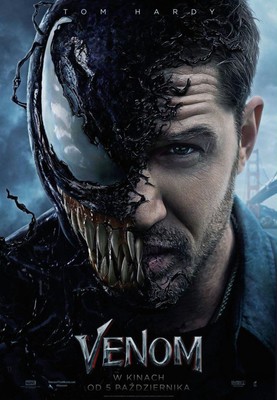 But to me, this movie will live and die by how well people receive Venom’s portrayal. Again remember Spider-Man 3, Venom was given the shaft, and people are still very bitter about that about eleven years later. But with Venom, the titular character was captured perfectly. His look was spot on and exactly what I was hoping for, minus the iconic white spider logo. Look check, but the look will only bring Venom so far his personality and character are equally as necessary, and I thought the film delivered them in an absolutely beautiful way.

Ultimately I think the best way to describe the film is a comedic buddy movie1 with a single actor. A combination I wouldn’t have expected going into the movie but one I fully appreciated when I left. Overall I have to say I enjoyed Venom despite the poor early reviews of the critics.