Crucible of Gold begins its tale with William Laurence and Temeraire having fully embraced their lives in Austrailia and are in the midst of constructing a pavilion when their lives are once more altered. This time Arthur Hammond, last seen in Throne of Jade arrives in Austrailia with an urgent message for the once loyal servant of His Majesty’s Royal Arial Corp. The crown is once again in need of Laurence’s dragon, Temeraire, so the diplomat arrived offering the once captain his rank back. 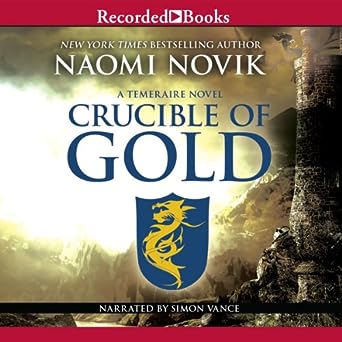 Laurence listens to the offer but is he is initially unsure of what decision he will ultimately make, partially because it is only offered to send him once more into unknown and harrowing action. The dragons of the Tswana are partnering with Napoleon Bonaparte to assault the Portuguese colony of Brazil in an attempt to reclaim their descendants that were abducted from their homelands and forced into slavery. Since the Portuguese are allies of Brittin, they must make great haste to reach them to provide assistance.

Once more Temeraire, Iskierka, and Kulingile disembark for a long journey, though this time it is aboard the Allegiance as it begins to make its way east to Brazil. Unfortunately, they mettle of man and dragon are put to the test, when the more rambunctious of the sailors cause the ship to be destroyed. The three dragons rescue as many of their crews and sailors as they can and with great effort they fly over the expanse of the open motion searching for a place to land.

Aside from the physical endurance, tested by their flight, the emotional fortitude of those dragons and their captains are also put to the test in turn over the rest of the novel. Each beast and captain is presented with at least a single moment where they are given a choice to continue their journey along the path they are currently traveling or seek the road less traveled. This collection of moments is the heart of the story. Each character is forced to take stock of their options and in the heat of the moment are forced to choose and then follow their decision to the end.

Crucible of Gold does a fantastic job of telling a compelling story, but it doesn’t stop there. After six novels, each with their own stellar character development, Naomi Novik manages to once again breath immense life into the lives of her characters. In fact that growth is one of the reasons, I have latched myself upon this series with such ferocity. With each new story, we are presented with everything from daily struggles to life-altering decisions. It is how the characters respond that help enrich the story, and this installment of Temeraire’s tale does not disappoint.