As Crucible of Gold came to a close, the British detachment led by Laurence and Temeraire managed to help appease the Tswana dragons by claiming the French dragon transports, the Polonaise and the Maréchal, allowing them to go home. After that Laurence was approached by Gong Su, Temeraire’s cook that Laurence hired way back during the events of Black Powder War. The cook revealed himself to be a servant of Prince Mianning, the heir-apparent to China. He presented a letter to Laurence and suggested that Laurence should return to visit his adoptive father to discuss Napoleon’s ongoing conquest. And of course Hammond, ever looking to improve the relations between China and Brittain agreed that they should go.

Now with everything that Laurence and Temeraire have gone through, it is hard to imagine what Naomi Novik might put them through in Blood of Tyrants. However within moments of cracking the book the new struggles are painted vividly as Laurence awakens on shores of Japan with no knowledge of himself. Now I will temper this with a quick word, as the book continues we learn that Laurence is not an empty slate. He eventually begins to remember things, but he has no memory of his life as an aviator. We eventually discover how he ended up on the shores of Japan, during a savage storm aboard the Potentate, he was claimed by the sea. And while the dragons help free the ship and embark on repairing the damage from the storm Temeraire seeks for and eventually finds Laurence along with his Japanese ally, Junichiro. 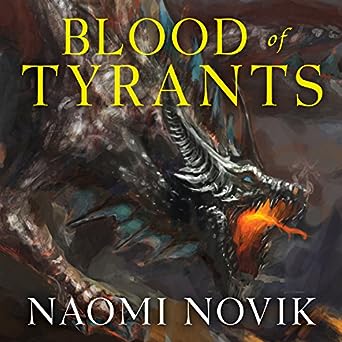 With Laurence retrieved, though his mind is still missing the past eight years, the crew of the Potentate resume their journey to China. Despite the missing memories Laurence is willing to embrace the diplomatic mission that was thrust upon them. Once there Laurence and Temeraire both discover just how far the conservative party is ready to go to prevent Prince Mianning from becoming the emperor of China. Now to secure the help they need to combat Napoleon’s thirst for conquest, Laurence and Temeraire need to investigate the threat of Brittish opium smuggling in China while protecting Iskierka and Temeraire’s egg.

Laurence’s struggle to complete his mission weighs heavily upon him as he struggles to reclaim his mind. This new internal struggle is one of the more fascinating aspects of this book, as the doctor recommends that Laurence not be given too much information about his life as an aviator to shield his already ailing mind. This forces the rest of the aviators to mince their words and choose them very carefully as they strive to follow the orders they had been given. But it is also infuriating to Laurence as he can tell there are things that they do not want to offer up in fear of doing more harm to him.

The new strands that the book weaves into the larger tapestry are once again phenomenal. Each of the new strands adds a new dimension to the whole while shining on its own. And as the book came to a climax I given a fresh new love of the series.