Brandon Sanderson is a fantastic author. And the arcing story he is telling in his cosmere universe is breathtaking. But he does not spend all his time living in that universe. Which means his faithful readers are treated to tales outside of that story. One such story is Skyward. This particular story centers around the life and struggles of Spensa aka Spin. She is a child who has a simple dream. She wants to follow her father’s footsteps and become a starship pilot. That single goal focused by a desire to help her people in their struggle against their enemy. 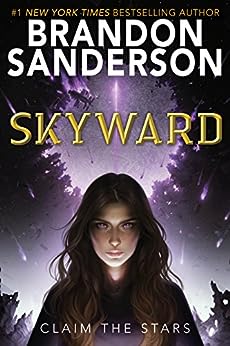 As with any of Sanderson’s work, Skyward is a terrific read. Unlike the rest of his work, the protagonist takes a little while for me to get behind and root for. At the beginning of the story, she has a chip on her shoulder the size of Mount Everest. And she is ready to attack anyone that gets in her way. I usually enjoy a snarky character who strives to endure a tremendous challenge. But Spin struck me as too childish for the role she reached for.

Yet, once she began to settle down and grow, the pettiness of her character dwindled. And she began to flourish as a character. Another thing I love about Sanderson’s work is that his supporting casts are always as flushed out as his protagonists. Skyward is no exception. From her childhood friend Rig to the eventual flight leader she affectionately nicknamed Jerkface, each has a rich backstory. And Sanderson dolls out those stories keeping them just out of focus but tantalizing. The story would never have reached its height without their assistance.

With sports, there are always a handful of moments that prove to be critical to the outcome of the game. It’s incredible how often you can look to sports and see an allegory of life. Throughout a person’s life, there will be a handful of moments that prove to be crucial in shaping that life. Spin’s life is no exception. And at each of those moments her dedication, perseverance and an enormous amount of luck prove critical to give her exactly what she needs. Not only that but she gets it at the crucial time, right up to the climax of the novel.

I will say that I rarely see the ending coming with the vast majority of Sanderson’s works. Though with that said, Skyward’s ultimate destination did not blindside me this time. There was a single twist that while not perfectly formed in my mind before its revelation made sense given the tone of the rest of the novel. I want Sanderson to focus on his cosmere works, to complete that masterpiece. That universe is so diverse that each story is marvelous. But Skyward is not a second-rate work. It was a fantastic story once I managed to get past Spin’s chippy pettiness.

And while I would rather see his next novel be a cosmere one. I will pick up Skyward’s sequel, Starsight when it comes out in October later this year.