Patricia’s fingers caressed the photograph in the album. Her fingers kept tracing James’s close-cropped brown hair. As Patricia ran her finger across the cheek on the image, she stifled a sob. Wincing under the scrutiny of James’s warm eyes, she buried her face into the album, struggling to restrain her tears.

When she calmed her sorrowful eyes, Patricia lowered the book. As she studied the picture, she caught sight of the banner for the homecoming dance over their head. She ripped her gaze away from the photograph. With her fingers clutching at the album, she remembered her last night with James. The memory blazed in her mind as if it happened moments ago rather than just over a year ago. 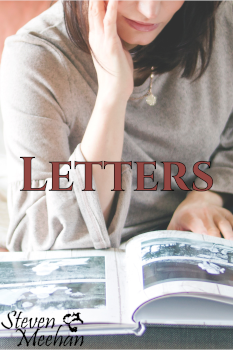 Gripping each other’s hands, Patricia and James glided across the school’s auditorium. She barely heard the lyrics of Van Morrison’s Crazy Love or the conversations of the dancers filling the room. Ignoring the banner and the decorations, Patricia focused upon James’s bright eyes. She never wanted to tear her eyes away from his. Those vibrant orbs sucked her into them like a whirlpool yanking ships into the depths. Patricia sighed and smiled, leaning into his chest.

Flashing her a warm smile, James tightened his grip around her as they swayed. Pulling at her waist, James mouthed the chorus in time with Van Morrison. She give me love, love, love, love, crazy love.

Leaning closer to Patricia’s ear, James asked, “How am I sappy?”

Swaying to the ballad in James’s arms, Patricia laid her head down on his shoulder and quipped, “You’re kidding me, right?”

Kissing her, James inquired, “What are you talking about?”

Raising her head, Patricia asked, “How much did it cost you to get this song played for the dance?”

“Oh, that?” James asked. Choking a chuckle down, he answered, “It cost me enough. But we get to have an amazing night, so it’s worth it.”

“How does hearing this song once make for an amazing night?”

“Well, who said they’re only going to play it the once?” James asked, kissing her again.

“How many times are they going to play it?”

Keeping one arm wrapped around her waist, James lifted her chin with his other hand and whispered into her ear, “They’ll be playing it a few times.”

Losing herself in his gaze, Patricia retorted, “As I said, you’re sappy.”

With a warm smile, he mouthed along to the song again, Yes I need her in the daytime.

Patricia laid her head against his shoulder, saying, “Sappy, but it’s why I love you.”

The couple weaved their way through the other dancers. As the music faded, James escorted Patricia off the dance floor. As the notes of the next ballad began to ring out, the two rushed for the refreshments table. Plucking cups from the table, James guided her past the occupied chairs and found a pair of seats along the wall. Patricia sat down, taking the offered drink. When James sat down, she took a sip and asked, “What is it that you wanted to tell me?”

Looking at the dance floor, he took a sip from his cup, and asked, “What makes you think I have something to tell you?”

Patricia placed her cup on the floor before busying her hands with her dress. Batting her eyes, she answered, “You only get this sappy when you have something serious to talk about.”

Gulping down his punch, James bit down on his cup as he reached into his jacket. “Well,” James muttered around it, his eyes darted everywhere except at Patricia.

Catching the motion, Patricia’s hands flew together as a smile erupted. Her hands started clapping, and her eyes began to sparkle. “You have something for me!” Patricia squealed.

Pulling the cup from his mouth, James frowned as he pulled a letter out of his jacket.

Patricia’s excitement faded as she took the letter from him and saw his stony face.

“I know you thought it might be something else,” James said, wringing his hands. “But I’ve been drafted.”

“No!” Patricia spat as she dropped the letter.

Retrieving the letter, James stated, “I have to report tomorrow.”

“No! You don’t!” Patricia insisted.

Shoving the letter back into his coat, he responded, “Patricia, I have to go.”

“You’re wrong,” she corrected as she gripped his hand. “We have to go. We can go anywhere you want, but you cannot go to Vietnam. We’ve been together for three years. I don’t want to lose you.”

Scooting his chair closer to her, James wrapped an arm around her and squeezed her tightly. “I have to, but I’ll be back.”

“Shhh,” he said, placing a finger against her lips. “Crazy Love is back on.” Standing up, he took her hand and pulled her up, saying, “Let’s have another dance.”

Blinking her eyes to push away the looming tears, she sang, “And the heaven’s open every time she smiles.”

Guiding her to the dance floor, he said, “I couldn’t agree more.” Wrapping his arms around her waist, he whispered the chorus into her ears. “She give me love, love, love, love, crazy love.”

Their foreheads touched as she tightened her grip around his neck. After a moment, she pleaded, “Please come back to me.”

“I’ll do everything I can,” James said as he pulled her into him and continued their dance.

As the memory began to fade, a tear started to roll down her cheek. As Patricia clenched her eyes, another tear escaped following the first’s path. When they collided a single drop of water fell from her chin onto the picture. With one hand she wiped the tear from James’s face, while she grabbed the letter on the table. All she could see were the words, killed in action. And the tears began to flow again.