With Liquid Assets and Weighing an Alibi completed, I turned my attention to the third and final Patreon post for December, a Thriller. Unlike the other tales, I don’t have a character waiting in the wings. Without the benefit of character, more blanks need to fill in, so to ease the burden, I jumped to NYC Midnight’s catalog. Once there, I searched the page for the word thriller and picked a random prompt.

My location came up as a bridge, and I needed to weave a mask somewhere into the story. I thought about the requirements and let my mind wander. How would I tie both these together into a compelling narrative? A bridge seemed easy enough to weave into a thriller, but how would I bring the mask into the story? Looking back at the prompt, I realized that other options existed, but ultimately I’m happy with the crafted tale. Inevitably while flash fiction tells a complete story, there always are some dangling threads. While Racing Fire is not the exception to prove the rule, I think I have some central characters to revisit the next time a Thriller comes up.

A couple are crossing a bridge to get home when something collides with the structure. As the taillights flare, they flee to survive… 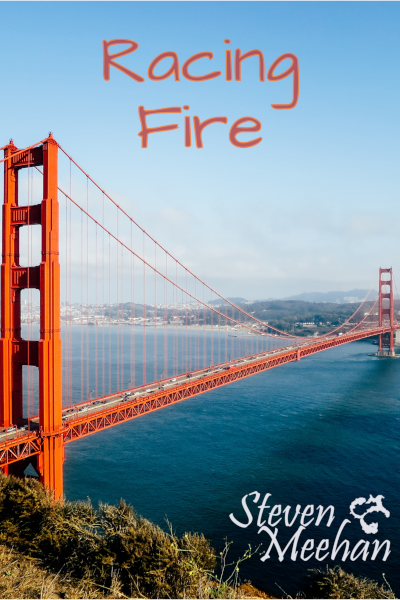 To read the story, head over to my Patreon page and become a patron. For $2 a month, you will get access to this and other flash fiction stories that I post.

Justin turned the car onto the bridge and shifted his position. “Babe, we’re crossing the bay.” Tightening his grip on the steering wheel, he added, “Should be about another thirty minutes.”

“Wake me once we arrive,” Sally moaned, lifting an eyelid. “I don’t want to think about anything till we get home, including your constant update of our arrival time.”

With a scoff, Justin ran his tongue over his teeth and shook his head. “As you command, you can go back to sleep until…” Justin trailed off as something streaked across the sky, tearing a red furrow through the air. After blinking, a flood of taillights encompassed Justin’s view. He slammed his foot on the brakes, and their seatbelts kept them in the car. As it groaned to a halt, they could hear squealing metal and screams cut through the music. Before either could react, the muffled commotion was capped by a tremendous boom.

“Up there,” Justin said, pressing a trembling finger against the windshield. “Do you see the red scar running across the horizon?”

“What are you doing?”