When dealing with fantasy, the words full moon invokes a particular image. They prepare the reader to encounter werewolves. So before starting to listen to this story, I expect the heroes to deal with some shape-shifting menace. Or if such a being isn’t the central antagonist, it would play a significant part in this case file. Much to my delight, the opening pages of this novel live up to the expectation.

In Tombyards & Butterflies, Orlando Sanchez paints a typical word picture of these creatures only to upend that image in the initial chapter of the book. In this scene, a werewolf is seeking help from the detectives. During that meeting, he informs the duo he’s sick, and before much else can happen something forces him to transform, without the full moon. Oh, and as a bonus, the creature is immune to all of its weaknesses. The result is a rampaging monster that the detectives kill in self-defense.

After the attack, The Dark Council blames Tristan for creating the disease that is spreading throughout the werewolf community and sends him an ultimatum. He can either surrender or be declared a dark mage and suffer the consequences. As with the previous installment, since Simon is immortal, this implication serves to keep the detective on his toes with death lurking around the corner. 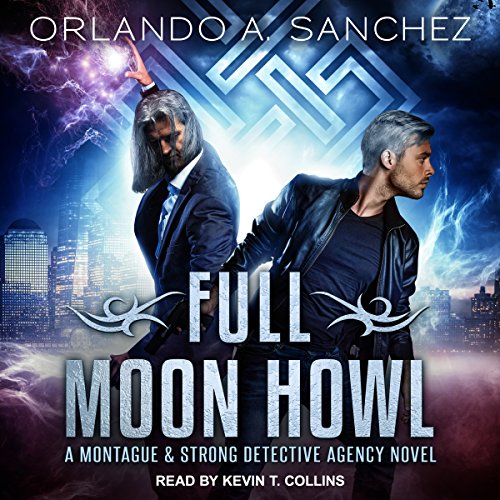 Taking a step back and looking at the book, the plot moves along at a good pace and is punctuated with enough action to capture my attention. But that doesn’t mean that Orlando Sanchez ignores his characters. Each continues to develop and grow from the initial page to the story’s conclusion. And the humor laced throughout Full Moon Howl is as sharp and well placed as the first entry.

The only drawback to the second installment is personal. The rest of the series is currently not available on Audible. However, the entire series is available on Kindle. Unfortunately, there are too many books I want to read and not enough time for me to get to them. With that said, I’m excited about these characters, so I’ll monitor the series page, hoping to find the next one ready for purchase.

But the series is too good to avoid while I wait for the Audible version of the book. I may end up adding the Kindle copy of Blood is Thicker to my collection to get my fix.