The man peering down the chasm smiled, waving his arms over his head. He glanced down at a collection of stones, and knocked them off the ledge, watching them plummet toward the lake. When the rocks plunged into the tranquil water, ripples spread across the surface. He turned around and scampered to his friend, resting his cast on the guy’s back. “Ethan, why are you worried?”

“Daniel, you broke your arm the last time you tried making that jump!”

Daniel pulled Ethan closer, smirking as he nudged his friend’s shoulder. “You make it sound so unpleasant.” 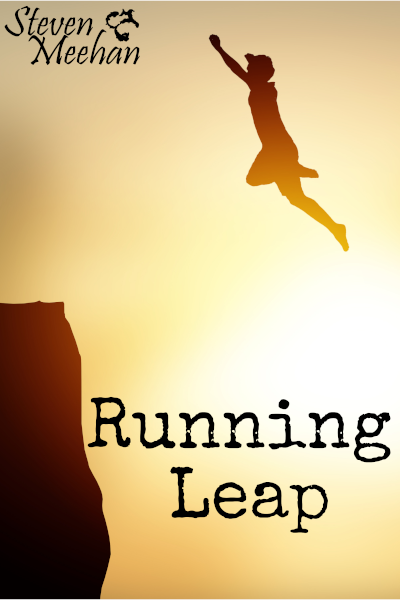 Ethan pushed Daniel away, as he thrust his hand toward the far side of the gorge. “That gap’s over ten feet wide, and I’ll remind you of two things. First, your earlier try came up short and second you almost killed yourself when you plummeted thirty feet into the lake.”

“Bah,” Daniel waved his cast over his head as he hustled back to the gap and peered into the calm water. “I can see the rock outcropping that gave me this lovely billy club.” He turned, waving Ethan over to the ledge as he pointed at the still lake. “To avoid a similar mishap, I’ll jump over the darkest patch of water.”

“That’s the dumbest thing you’ve ever said.” Ethan grabbed his friend’s collar and dragged him away from the edge.

“Stop trying to impose your logic on me.”

Ethan’s fingers tightened as he hauled his friend down the hill. “You have done stupid things before, but this takes the cake. I’m not about to let you kill yourself, and Madison will never forgive me if she has to pick you up from the emergency room.” Ethan jerked on Daniel’s shirt spinning him around and gripped his shoulders, “Or worse the morgue.”

Daniel pulled free from Ethan’s grip and shoved his friend. “You’re not my girlfriend or my boss.” He thumped his chest and pointed back at the precipice. “I’m leaping across that chasm.”

“What’s the point of risking your life?”

Daniel backed toward the gorge, licking his lips. “You’ve never understood why these experiences are important to me.”

“No daredevil stunt is worth dying.” Ethan lunged and grabbed Daniel’s wrist.

With a scowl, Daniel twisted, pulling his arm free and rammed his shoulder into Ethan’s.

Ethan stumbled and fell to his butt. With a snarl, he clambered to his feet and rushed his friend. His left fist swung at Daniel’s jaw, but the man batted the strike away with his uninjured forearm. “Daniel, how many trips to the ER have you had because of your foolish stunts?”

Daniel wrapped his arm around Ethan’s and shoved him into a tree. He lifted his cast wrapped forearm, tapping it against Ethan’s neck. “If you try to stop me again, I will hit you with the weapon the doctors graciously provided.”

“Oww!” Daniel yanked his fist from Ethan’s grasp and thrust his friend against the tree. “There was no need for that.” Daniel clenched his teeth and shoved Ethan down, slamming his knee into his friend’s gut. As Daniel released his grip, Ethan tumbled to the ground. Drawing a sharp breath, Daniel fondled his cast and stifled a curse. “You cannot stop me from making this leap.”

“Ugh!” Ethan’s hand shot out, grabbing Daniel’s pants. With the fabric clutched between his fingers, Ethan tugged on the jeans.

Daniel yanked his leg free and bolted toward the chasm.

“I have to jump!” Daniel’s arms and legs pumped as he rushed for the ledge.

Ethan climbed to his feet, staggering after his friend.

As Daniel approached the edge, he crouched down and leapt in a fluid motion.

Daniel’s arm shot out as he glided through the air and smiled.

Ethan fell to his hands and knees and crawled to the chasm. When he reached it, Ethan peered over and collapsed. “You’ve gotten yourself into an awkward situation.”

“Oomph!” Daniel’s body inched toward the safety of the ledge, “Umph! Help would be marvelous.”

Ethan rubbed his eyes and stared at Daniel dangling from the edge, as he propped his chin up with his hands. “You’re aware that there’s no bridge spanning these ledges.” Ethan’s head glanced to his left, then his right. “That leaves me the single choice, trekking around the lake which would take too long.” Ethan’s forehead dropped to the earth. “If you fall, I’m dragging you to Madison not emergency services!”

“If you won’t help, please let me concentrate.” Daniel’s fingers clenched around a root as his foot searched for a perch. When his toes found an outcropping, he pushed up while he hauled himself over the precipice and collapsed upon the dirt.

Ethan sat up, pulling his legs to his chest, “Was it worth it?”

Daniel rolled over and braced himself up on his elbows. “It was amazing! The adrenaline rush is unbelievable!”

Ethan rose and dusted off his pants. “You’re aware that Madison’s going to kill you.”

The laughter intensified as Daniel dragged himself away from the precipice, “She won’t do anything that rash.”

“Why are you laughing?”

Daniel’s head cocked while his grin widened. “Can’t you congratulate me for making it?”

Daniel shook his head and tapped something poking out of the ground. “Well I’ll thank the tree’s root for giving me the initial perch on the ledge.”

Ethan peered at the rippling surface as he kicked a loose stone over the precipice. “You realize, the patch of the lake you were dangling over wasn’t very blue. If you fell, you probably would have snapped your legs.”

Daniel scooted toward the edge and scrutinized the water. His eyes widened and latched upon Ethan’s as a lopsided smirk emerged, “You know, I think you’re right.” He tapped the earth next to him. “But, I made it.”

Ethan slapped his face and grumbled, “Something’s wrong with you!”