With the month coming to an end and having finished Beginnings, I turned to the second genre of the month, a fantasy. When I pulled the results for the month, I planned on steering clear of Darren Gilbert. So, I turned to DeviantArt and searched its library for fantasy. Thumbing through the resulting images when an image by lukesynek captured my attention. The ape-like creature dominating the stormy landscape demanded Darren’s attention.

In Darren’s world, the biggest threat to any rouge mage is a group called the Hunters. I’ve painted them as the enforcers of the ruling class of wizards. And while true, I’ve intentionally left them mostly undefined. But this image presented me with an option to explore their methods. Get comfortable and head on to my Patreon page to become a patron and discover Darren’s entanglement with the Hunters.

Darren walked along some power lines when a thunderstorm rolled in. As lightning strike about him, a creature made of electricity… 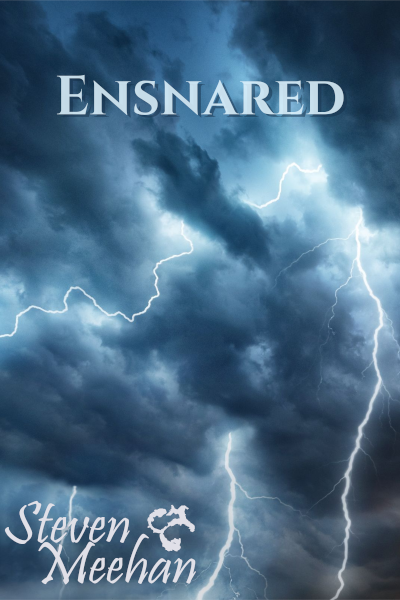 When the first droplets of rain fell upon Darren, he raised his hand as crackling blue energy arced about his fingers. A moment later, the gathering magic surged out of his fingertips, forming an umbrella. Darren lifted it over his head and continued walking along the footpath. He tethered the barrier to his shoulder and wiped the few beads of water from his face as lightning streaked across the sky.

Darren reached up and touched the magical construct, and pulsing green energy flowed from his fingertips into the mystical umbrella. As the thunderclap rolled across the plane, another bolt of lightning raced toward Darren. As the electricity neared, it turned and slammed into the ground a dozen feet away. With a smile, Darren grinned and turned his head. Darren chewed his lower lip as his eyes flittered between the forest’s edge, the swelling storm clouds, and the nearby power lines.

Darren’s fingers ran through his hair as he released a pent-up breath. He kicked some loose gravel down the path and resumed walking away from the forest. When Darren approached the nearest tower, the power lines hummed, crackling with energy. His eyes drifted to the mounted transformers, and Darren saw a glow swelling about the lines running into the boxes.

The barrier keeping the rain off him flickered and vanished as Darren backpedaled toward the safety of the forest. The coalescing power flashed and arced from the nearest transformer and plowed into the ground, creating a flash of blinding blue light. As the energy’s illumination dimmed, Darren’s breathing stopped while he inched away from a growing mass at the base of the tower. With a loud pop, the swirling and crackling energy exploded. As it deflated, the wriggling energies formed into a snarling ape-like creature with a set of antlers sprouting from the thing’s scalp.

Darren’s fingers splayed as he thrust his hands at the monster, flinging red lightning from his fingertips. The collection of power slammed into the creature’s chest. As the attack burrowed into the monster’s electrical body, it whirled toward Darren and charged the wizard.