When I collected the results of the genre poll and saw that a Historical Fiction would be included, my mind flashed to Temeraire. In Naomi Novik’s series, dragons exist and they serve as the air force of the world during the Napoleonic War. The concept interested me, but in my mind, dragons cannot exist in a vacuum. They need to be paired with magic. With that connection, I knew my Historical fiction would be blended with a fantasy. With the fantasy portion of my story selected, I needed to figure out what point in history to shove my narrative. Of course, I’d recently seen the episode of Big Bang Theory where the gang is playing their mystic card game and this edition blended magic with the wild west. And just like that, I knew how I was going to frame my storyline.

With the structure for my story set, I needed some characters to fill it with, and it didn’t take me long to come up with the protagonist. Bounty Hunters are cool. Case in point, check out Mando in the Mandalorian or Boba Fett in the Empire Strikes Back and Return of the Jedi. Yes, their armor makes them more imposing, but they are stoic and ooze cool confidence. Thankfully, mages and dragons have a similar gravitas to that resilient metal. It didn’t take long to connect some dots and have a sub-par mage turn to collecting bounties to pay the bills. Sit down and get comfortable as we follow this hunter as he closes in on his target.

A bounty hunter heads into Dodge City on his dragon, and heads for the nearest saloon. With his Winchester he barges in seeking his mark… 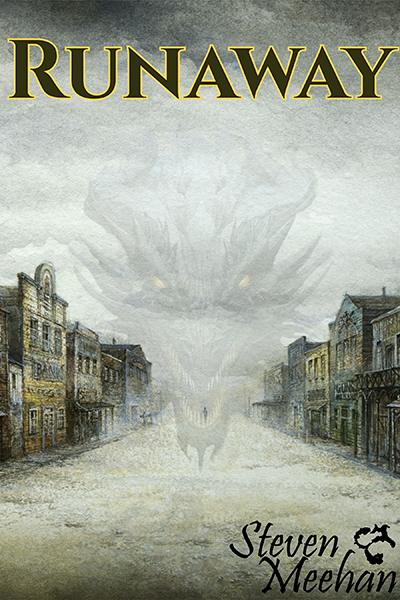 “Why do they always decide to run?” Samuel squeezed his legs, spurring his dragon to greater speeds. The wind buffeted Samuel as the world beneath him blurred with each stroke of his dragon’s wings. As they neared the river, Samuel rubbed his ride’s rough hide as he inched up her back. He pulled on the reins and pressed a hand against her neck, “Take us down, Pearl.”

With a guttural growl, the snow-white dragon sliced through the air, plummeting to the earth. Just before Pearl collided with the rushing rapids, her body writhed, keeping them out of the water. A handful of strokes later, Samuel tugged the line, pulling Pearl into a gentle turn to follow the winding waterway.

He squeezed his legs, and Pearl flapped her mighty wings, propelling them into Dodge City. Samuel pushed against Pearl’s shoulder blades and she drifted lower, skimming the tops of the buildings. He guided Pearl down the street, bringing her to a hover in front of a saloon. Samuel pressed against her neck, and she landed. He took off his leather cap and let the sunlight bathe his face.

Samuel reached under his shirt and pulled out a charm. He patted it against his chest and grabbed his rifle. He hopped off Pearl’s back and laid his weapon’s barrel against his shoulder, while he examined the surroundings. Samuel glared at the entrance as he drew his revolver, letting the comfortable weight reassure him. Taking a deep breath, Samuel holstered his pistol and kicked the door open. He rushed in as his Winchester’s sights fluttered about those gathered inside.