When I sat down to flesh out this piece of Micro Fiction, my mind rushed to a camp out back when I was a young boy scout. While most of the details from that expedition are fuzzy, the bit I vividly remember is how one of the older scouts gave me a lesson in how the imagination worked. Our campsite was running along a creek, and he pulled out a night vision scope and encouraged all the younger scouts to examine a patch of shadows. As we all took turns exploring the area, he pointed out the motion.

I remembered taking my turn behind the scope to study the area. Despite a serious search, I found nothing at first. It didn’t take long, but I eventually saw motion. As scout after scout recognized the movement, this older scout proclaimed that the thing twitching was a crocodile or an alligator. It doesn’t matter which animal was supposedly on the other side of the water. As a young man, well as a young teen, I was terrified that we were so close to a predator. So I kept studying it, trying to figure out why it hadn’t stormed our campsite.

Eventually, the older scout told us he was leveraging our imaginations. All he did was make a suggestion, which stoked our overactive minds. The scout allowed our minds to do the heavy lifting for him. I’m not sure if he felt bad for scaring a bunch of younger kids, or if the scoutmaster told him to knock it off. Ultimately, it didn’t matter, since the dread he stirred up refused to retreat. It’s also the perfect example of a storyteller using the most powerful tool he has, the audience’s imagination.

With that memory firmly in place, it made perfect sense to pair it with Lucas and his ghosts as he finishes a picnic with a glass of wine. Come, sit down and allow me to give you a mini-escape and kindle your imagination. 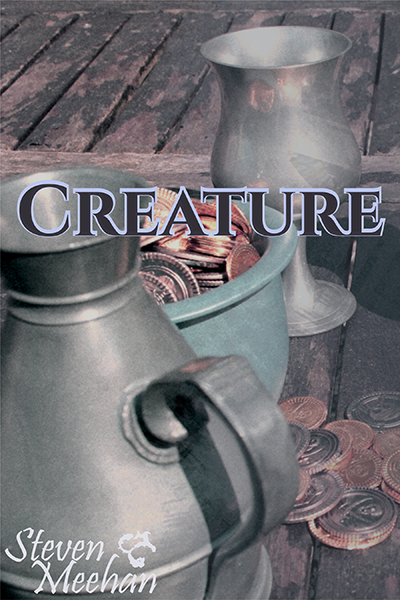 The wine trickled down Lucas’s throat while Ricky floated overhead. Lucas laid the cup down and rubbed his eyes. “Ricky, get back into your portrait!”

The shade groaned and jerked an ethereal thumb over his shoulder. “I suppose you’re not concerned with the monster, lurking in the distance.”

Lucas sipped his wine while a female voice filled the air. “There’s nobody over there.”

With a snort, Ricky wrapped himself around Lucas like a snake. “Samantha, I’m not imagining that scaly mass.”

Lucas took a gulp of his drink and walked to the river’s edge.

As the ghost’s body began slipping into its portrait, Ricky pointed toward the shadows. “Can’t you see it?”