As the limousine drew to a stop, Kyle stepped in front of the vehicle, slapping the hood with a file folder.

The driver’s window lowered, and he popped his head through the opening. “Are you aware of who I’m driving?”

Kyle tapped the packet against his forehead as his lips curled into a grin. “I trust Chase Heath is nestled in there.” He thrust the dossier toward the backside of the limousine. “I have important questions for him.”

The rear door opened, and a stocky individual leaned against the vehicle. “You heard our driver, step aside.” 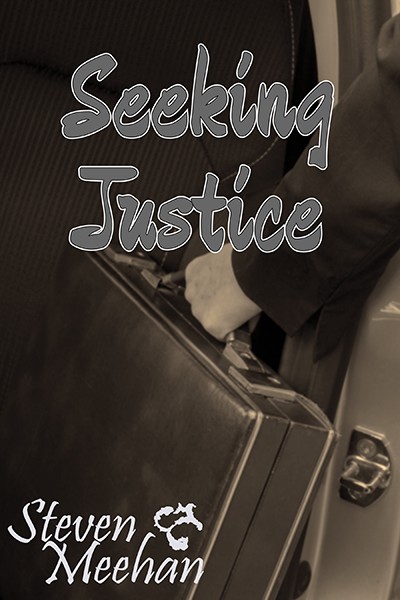 Kyle dashed to the opening and yanked on the individual’s arm. As the stranger stumbled, Kyle slipped into the limo, tapping Chase’s knee with the folder. “I know you are a busy fellow, but you’re willing to answer questions, right?”

“Before your muscular lackey does something you’ll regret,” Kyle pointed at the window, “If we don’t leave, you’ll fall out of your motorcade. There’s no reason your driver cannot resume his place in the procession, while we have our brief conversation.” He tapped the file as his grin intensified. “Besides, I’m here to ask about Penny Holmes, ejecting me now will destroy your public image.”

The politician shook his head as he released a breath. “Let him go, Eric.”

The security guard tugged Kyle’s collar as he closed his eyes. “Chase, just say the word, and I’ll remove him.”

Chase gripped Eric’s wrist. “Our friendly inspector is correct; I cannot afford to send him away. Release him.” With a sigh, Chase pressed a button, “Get back in line.”

As the vehicle resumed, Kyle smirked at Eric. “Relax and don’t interrupt the adults.” Kyle opened his folder and slid the map off the stack. He snatched a pair of photos and dropped them into Chase’s lap. “I believe you’ve seen these photographs of the crime scene.”

The woman sitting to Chase’s left grabbed the pictures as she sucked on her lower lip. Her eyes bounced between Chase and Kyle as she waved the images over her head. “Why are you investigating her murder?”

“The victim’s parents insisted I explore every aspect of this case, since nobody’s made any progress over the last several months.” Kyle reached over and tapped a section of the picture. “And before you dismiss these as the same photographs the police showed you, I’ve enhanced them.”

“It’s okay, Alyssa.” Chase retrieved the snapshots and studied them. “What am I supposed to find?”

Kyle stared at Chase’s face as he touched an edge of the photo. “I don’t want to influence you, just inspect the pictures and tell me if you notice something that you missed during your earlier examinations.”

Chase twisted the photographs toward Alyssa. “Do you see anything?”

A shudder raced down Alyssa’s spine as her head turned to the window. “There’s nothing different with them.”

Chase rolled his eyes as he showed the prints to the other passenger. “How about you, Erwin? Can you find something that might help our guest?”

While the slender man ran a hand along his tie, he took the pictures and examined them. He swayed and spun the picture toward Kyle, tapping an area above Penny. “I suppose this could be a shadow, but I doubt it’ll help you.”

“Those were taken when the investigation started.” Alyssa ripped the photographs from Erwin’s grasp and threw them at Kyle’s face. “If that’s all the benefit your enhancements offer, then you wasted your time.”

Kyle retrieved the photos off the floor and touched one just under Penny’s outstretched hand. “When you first examined these images, did anybody notice this scrap of paper?”

Alyssa’s shoulders slumped as she dragged her fingertips down her face. “Something that trivial couldn’t help anyone in this investigation.”

“That’s a foolish opinion.” Kyle ran his tongue along his teeth as he laid an ankle across his knee. He wriggled into the seat, placing the folder upon his lap. “You never know what detail will bring everything together to show the truth behind the crime.” He opened the dossier and withdrew the folded map. “Sometimes the guilty party confesses, but other times something as simple as a scrap of paper unlocks those mysteries.”

“Which you don’t have.” She thrust her arms across her chest as her face darkened. “And now we can say this conversation has wasted everyone’s time. The police keep us informed of their investigation, and they never collected such a fragment.”

The investigator flipped the packet, revealing a jagged edge. He leaned forward, running his finger along the tare.

“Don’t fall for his theatrics.” Alyssa tore the map from Kyle’s grip and threw it across the limo. “You cannot suggest that is the source of this phantom scrap of paper.”

“Chase, you have a devoted aid.”

“What are you talking about?”

Kyle pressed his back against his seat as he rifled through the contents of his folder. When he found the correct photograph, Kyle closed the file, clutching it to his chest as he passed the image to Alyssa. “You should have more faith in your boss. He’s a good man.”

The photo fell from Alyssa’s fingers as she threw herself at Erwin.

Eric jumped forward and pulled her off Erwin while Kyle lifted the picture and handed it to Chase. “While the media assumed you were Penny’s fling, it was Erwin.”

With a glance at Alyssa, Erwin lunged for the door.

Unfortunately for the aid, Kyle’s fist was faster, and Erwin crumpled. Kyle jammed the button next to the speaker. “Pull over, it’s time for my departure.” When the vehicle stopped, the investigator climbed out. He gripped Erwin’s collar and dragged the unconscious body from the limo. Kyle secured the murderer and stared into Chase’s eyes. “Make sure Penny receives justice.”

Chase’s lips contorted into a snarl, “Erwin’s not weaseling out of his punishment.”

As Kyle’s palm hit the roof, the limousine pulled away, rejoining the vehicular procession.