While I was setting up my new phone, I stumbled into my Photo of the Day app and I setup its widget on my home screen. With the quick previews, a collection of lavender flowers caught my attention. Instantly, I knew it would be the center of a story. With my desire to create a story based on the image, I collected the URL and prepped my digital notebook for the story. As the days ticked by, the potential story wormed its way through my mind, poking at the collection of characters housed there. Eventually, the tale selected the protagonist, and the story tumbled from the depths of my mind. 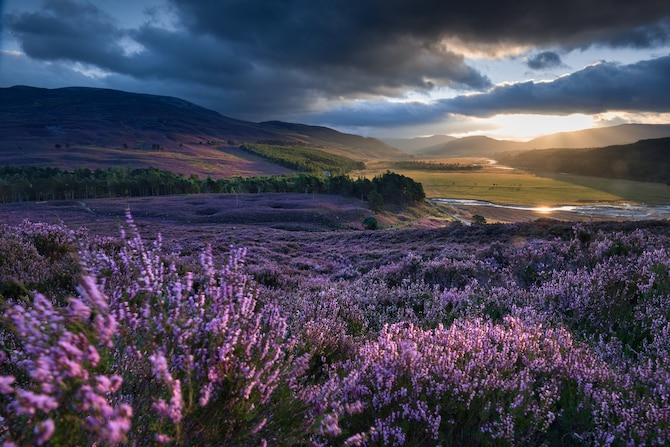 A paw plummeted to the ground, crushing the discarded remnants of the surrounding trees. With a grumble, a furry beast emerged from the forest’s edge. As the animal strode from the protection of the forest, it halted when the crunching twigs and leaves gave way to an undulating sea of purple flowers.

While the statuesque creature stared at the field, the sun’s golden rays crested the distant mountains and raced toward the swaying plants, bathing them with their first meal of the day. With each passing moment, the din of the forest diminished. As the silence intensified, the bear rose to his hind legs while ripples washed over its body.

When the rippling ceased and the last of the dark fur receded, a stout man stepped closer to the flowers, running his hand through his thick hair. As the individual stood there, the chattering wind chipped away at the nascent stillness like a chisel striking a stone.

“Lander, why are you here?”

Without tearing his gaze from the undulating lavender carpet, Lander reached up and interlaced his fingers behind his head. “Neville, why are you bothering me?”

“You shouldn’t be here wasting your time.”

“Where should I be?”

“Preparing for the fight looming over us.”

The towering figure’s waist twisted as his lips pulled into a harsh line. “Is there a problem with me separating myself from the inevitable maelstrom to bathe in the sight of something beautiful?”

The newcomer rushed forward, grasping the bridge of his nose as he reached out and squeezed Lander with rough fingers. “Nobody thinks you have to abandon the things of beauty.”

“Then, before we rush into something terrible, stand here with me and appreciate life’s splendor.”

“While I agree,” Neville said as his hand swept across the violet field, “that this is a stunning view. You have responsibilities that require your personal attention.”

Sucking on his lip, Lander tapped Neville’s hand with a loose fist. “Amid barbarism brought about from warfare, we must strive to preserve our connections with the beautiful aspects of life, or risk losing everything we hold dear.”

“That doesn’t excuse you from stepping away from your duties.”

With a soft sigh, Lander glanced at the ground and kneeled. As his knee sunk into the earth, he traced the lavender petals of a flower. “I agree. Rebuffing another sect of shifters is important. However, it is just as critical that we keep ourselves grounded.”

“With the rising sun, Cedric’s tribe is about to strike.”

“Which is why I needed to retreat from those obligations for a few transitory moments to appreciate the joyful aspects of life.”

“Lander, typically, I’d agree with you.” Neville squeezed his friend’s shoulder and lifted him off the ground. “Unfortunately, these jaunts have been increasing in their frequency and duration.”

“Once we’ve dealt with the other tribe, you’ll be able to retreat to your sanctuaries.”

“No,” Lander said as his head swung back and forth. With his brow sinking, Lander’s tongue ran along his teeth. “If we defeat our enemy today, we’ll embrace the momentary relief. However, another aggressor will step in to assume their place and again, I’ll be pulled away from embracing nature’s beauty.”

With a broad smile, Lander spun towards his friend and gripped his shoulders. As his grin widened, Lander patted Neville’s cheek. “It’s these jaunts that remind me of the importance of our struggles.”

“Then use this inspiration to create a plan to disrupt the impending assault from Cedric and his packs.”

Lander lifted his hand, blocking his view of the violet sea of flowers. Instantly, his skin rippled, and his fingers transformed into thick talons. His gaze lingered on the implements of destruction for several heartbeats as a silence wrapped itself around the two shifters. The thump of Lander’s knees slamming into the ground shattered the fledgling stillness. With a heavy sigh, Lander lifted his rippling paw and slammed it into the ground, pulverizing a patch of verdant grass.

With sorrowful eyes, Neville hooked his friend’s arm and hauled the shifter to his feet. “I understand your desire to bathe in beauty. Unfortunately, right now, there are duties that prevent you from indulging your desires.”

“Despite our long friendship,” Lander said, turning away from the field of flowers, “you’ve constantly missed the point of these trips.”

With a groan, Neville paused beside a leafless tree. “If I’m missing the reason, please explain it.”

Lander halted between two trees and raised his finger to a drooping branch. He traced the laden bough with his knuckles and twisted his head toward Neville. “If we don’t constantly remind ourselves about what we are fighting to protect, we risk turning into the monsters we’re defending against.”

“Do you really think we’ll end up like Cedric by ignoring the simple beauty the world can offer?”

“Cedric and his people weren’t always this belligerent.”

Neville’s knuckles dug into his temples as he rushed to Lander’s side. “Are you saying their entire tribe turned into monsters because they lost their ability to appreciate life’s splendor?”

Lander shook his head as he clasped his hands behind his back and resumed his march away from the undulating lavender carpet. “Their lack of attachment allowed the Hunters’ attention to warp them into unwitting accomplices.”

As Neville swallowed a lump, he slowly turned toward the violet sea. As the golden beams of light mixed with the rich purples, his knees trembled. His wobbly legs carried him closer to the forest’s edge as he rubbed his chin. “If we require an anchor to prevent our descent, then I’ll remember this glade of flowers.”