Immediately upon pulling the result poll, my mind bounced between potential topics, searching for potential storylines. After a couple of days, I narrowed the fledgling thoughts to the singular seed for October’s Action/Adventure tale. This story will highlight one of Charles and Lucile’s first jobs. Unfortunately, after securing the cargo, a collection of their competitors swooped in, seeking to take over. As Charles navigated the Drifter II around an asteroid field, the engines died. As the ship’s momentum slowed, Charles dropped into an asteroid and rushed to the engine room and began the repairs.

With raiders and pirates searching for them, Charles settled the Drifter II into an asteroid’s crevice and started repairing the engines… 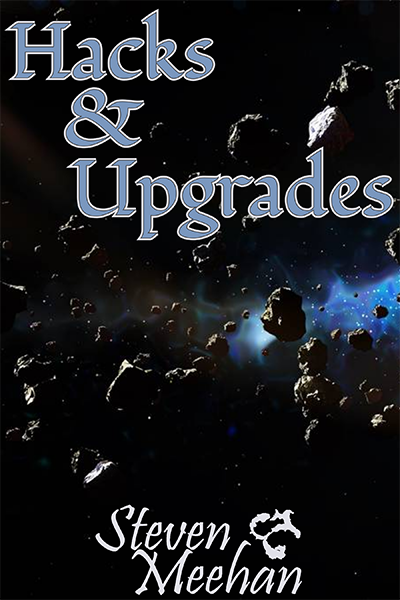 As sparks burst from the engine’s innards, Lucille leaned over her friend’s shoulder. “Didn’t you mention something about how this deathtrap you purchased was simple to repair?”

Charles laid his tool down and rubbed his eyes. With a huff, he patted the metal shell as his gaze drifted toward his companion. “Weren’t you supposed to stay in the cockpit and keep an eye out for the band of raiders intent on disabling our ship, so they can board us and retrieve our cargo?”

“An alarm will blare when our competitors get within range.” Lucille’s arm stretched out as she turned and walked about the engine, tracing the warm metal with her fingertip. When she reached the far end, she stopped and folded her arms across her chest. “Though if we’re still trying to repair this broken motor, it won’t matter where I’m sitting.”

“If that’s the case,” Charles said, grabbing a different tool from the box at his feet, “did you come here to help fix the ship?”

“Of all the skills I’ve picked up in my life, knowledge of repairing machines isn’t among them.” Lucille rested against the engine and tapped her toes. “And since you know that, what do you expect me to accomplish?”

A bitter laugh rang as Charles leaned into the open access hatch. “You’re going to have to learn how to make simple repairs.”