I hope everyone has had a Merry Christmas, and I wish everybody a Happy New Year. As I sat with family on Christmas Eve, we all took turns opening our presents. While I’m thankful for each present I received, there were two that I’m hoping will help me further my writing skills. The first is a journal entitled Write The Story. Each page has a story prompt and a list of items I have to include in the story. Despite dealing with a lot of issues that crept up on me during the month, I did not reach for this gift to create the exclusive stories for my patrons. Instead, I grabbed a different present, Rory’s Story Cubes, to provide the prompt for my writing.

That present was one of the White Elephant presents we exchanged at the end of the Christmas party. I used three dice for each of December’s stories. After rolling all nine dice, I selected three and used them for my drama. It took me a little while to weave an outstretched hand, a rook (to my eye), and a speech bubble, but they provided me an excellent starting point for the tale. With the building blocks ready to use, I turned to my collection of characters and instantly I knew this story was best suited for Marcus and Benjamin, though I would focus on the ghost portion of that duo..

So, sit down and get comfortable as you follow Benjamin on his journey to uncover the details of an upcoming crime.

Despite having found a lead on his murderer, Marcus asks Benjamin to enter an elaborate home to determine when a criminal will act… 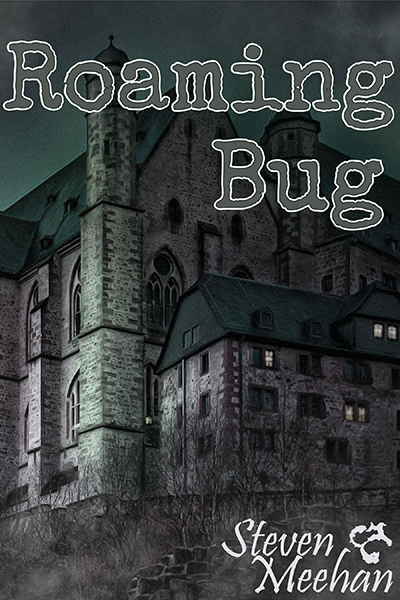 “Head on in and find out when they’ll be making their move,” Benjamin said, placing his ethereal hand against the building’s stone surface. “How did Marcus talk me into this wasteful trip?”

With a deep breath, the shade shoved his face into the stones. When he pushed through the wall, his body burst into millions of green motes that floated along the empty hall. When they reached the far side of the corridor, they wriggled through the cracks in the mortar, emerging into a different hallway, with a handful of criminals sauntering through it.

As the pinpricks of illumination flowed from the stones, the group marched in silence. When they were halfway toward the next intersection, words drifted up to the coalescing dots of light. As Benjamin’s body reformed, his chest fell as he bumped against the interior wall. His fingertips slid into the stone surface as he inched closer to the criminals. “Marcus’ obsession with clearing his caseload is getting on my nerves, especially since we found that lead in my murder case when we rescued Mrs. Peirce.”

“Are you certain the cops lingering just outside the property do not have ears on us or this conversation?”

The man leading the group stopped and ran his hands through his hair as air rushed past his lips. After his chest swelled, he grasped his neck and clicked his tongue several times. “Yes, Gregory, I’m sure. While the police aren’t the most subtle when it comes to their presence, they don’t possess the probable cause required to get in here, let alone plant enough listening devices to eavesdrop on our conversations.”

“I have better things to do, and more important leads to investigate.” The shade shook his head as he pushed off the wall. When he reached the group’s leader, Benjamin leaned forward, sliding down the man’s face. With a sharp inhalation, the shade’s hands shot out, grasping the criminal’s ears. “Don’t waste my time and start spilling your guts on the details of your upcoming crime.”