After writing Runaway and Insight’s Dual, I focused on the last narrative for the month. When I collected the results from the poll, my mind leapt to a previous collection of stories as a base for this tale. As the next two weeks progressed, that idea sprouted into the crux of Daniel Shaw’s latest adventure, Blockade Runner. I published his first instalment, Shaw’s Outset, a little over two years ago on my blog. While I have spent little time with Shaw’s crew recently, I’m eager to correct that deficiency.

With the basic outline of this crew’s story entrenched in my mind, the meat of the tale flew from my fingertips. As the last words of the first draft tumbled out of me, I leaned back in my chair and smiled. It had been more than a year since I visited this ship and its crew, and I enjoyed the journey. After finalizing the story, I’m excited to continue delving through the adventures of Shaw’s crew. Sit down and get comfortable as we follow the Scythe as it attempts to bypass a blockade.

Daniel and his crew are running cargo for their employer, but they need to slip through a world ship’s blockade to deliver the cargo… 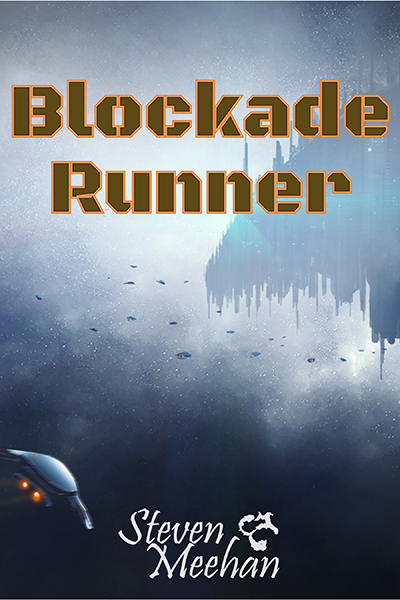 “We won’t get through this blockade.”

Daniel gripped the entrance to the cockpit and smiled as he leaned through the opening. He reached inside and activated the nearest comm. “Franco, stop being so dour and pessimistic. You need to focus on keeping my engines running smoothly.”

“You know he’s not entirely wrong,” Cecil said as he twisted about in his chair. He waggled a finger at Daniel as his lips tugged into a smirk. “In fact, I’ll be willing to bet you one hundred credits that we don’t get through without some kind of trouble.”

“Considering that our success depends on you completing your part to perfection,” Daniel released the doorframe and crossed the tiny room to grab Cecil’s chair. “I wouldn’t want to encourage you to fail.”

Laurie snorted as she glanced over her shoulder.

“Do you have something to add,” Daniel said, gripping her seat.