What’s the saying about best made plans? Or what happens the moment you confront the enemy? Everything goes south. That said, October has been a decent month in the drafting process for Harrison & Sylvia: Conspiracies, I just haven’t finished as much as I originally planned on. As I sit back and crank out the last two Patreon exclusives, I realized just how poor my writing was when I sat down to work on Conspiracies. If I didn’t know any better, I would have assumed the stories were written by someone else.

However, that’s enough of an update for my collection of short stories. Between finishing Seconds and another section of my short stories, I revisited my master thief, Jessica. However, this time, instead of placing her at the end of some convoluted job for hire, I wanted to highlight a bit of her character. It didn’t take long for a story to embed itself in my mind.

So come, sit down and allow me to tease you with Jessica’s choice of investment.

Every so often, Jessica refuses to accept work for hire. During these voluntary breaks, she takes care of her future finances… 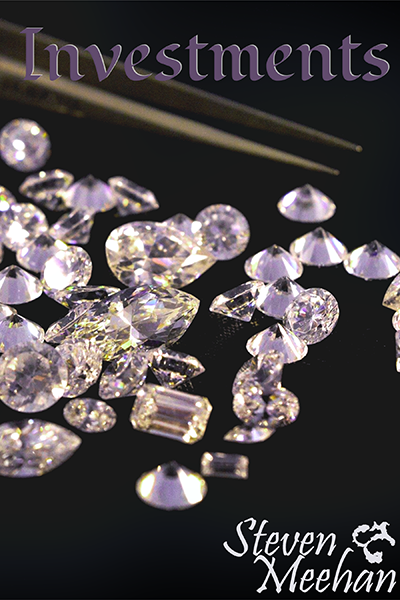 When the soft tile cleared the metallic frame, Jessica laid it atop another. Smiling, the thief slid across the rope until she dangled over the opening. Her nimble fingers attached an anchor to the support beam and threaded a second line through it. After securing the additional cable, she transferred herself to the new cord and lowered her head through the hole.

When her eyes emerged into the storeroom, the thief wrapped the rope around the hook affixed to her waist until the slack vanished. As she hung in the air, she grinned at the jewelry spread out below her. Jessica withdrew a small trinket from the pocket strapped to her thigh and pulled its connector free as she unfolded the device. Once the wire stopped flowing from the housing, Jessica inserted the plug into the camcorder. Instantly, her machine flared to life and images splashed across its screen. When a solid color filled the display, Jessica tapped the sole button on the left side of the enclosure and pressed it against the single security camera.

While the thief’s mouth curled into a warm smile, she tugged on the rope, creating enough slack to unhook it from her belt. She held herself in the opening and stared down at the loose stones arrayed beneath her. As Jessica took a deep breath, she lowered herself from the ceiling, one inch at a time. When her fingertips brushed the glass, she kicked, flipping herself over.

She rocked back and forth until she cleared the case and released the rope. When the thief landed on the far side of the display