With Hunt penned and published, I turned my attention to the second genre from January, a comedy. As I sat in front of my monitors, my brain stubbornly refused to spin a tale. After several false starts, I headed over to the first line generator over at Writing Exercises. After generating the first line, I stared at the words on the screen.

He kept absolutely still as the footsteps got louder…

At first, I didn’t understand how I could weave those words into a comedy. Then I remembered Blue Streak. As I leaned into the movie for inspiration, a storyline popped into my mind. So, grab a seat, get comfortable, and enjoy the tale.

When approaching footsteps tore through the thick silence, an intruder slips into a vacant office to wait for his next opening… 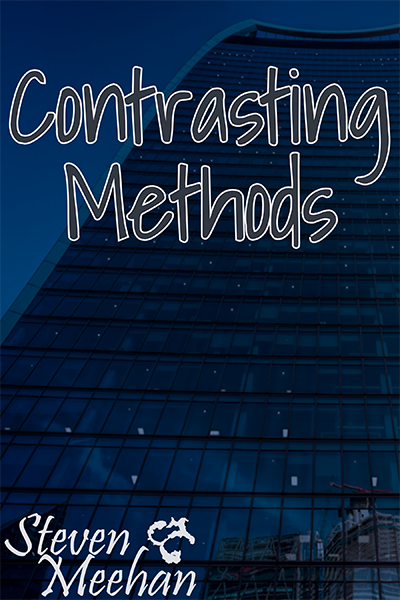 He kept absolutely still as the footsteps got louder. While holding his breath, the intruder positioned a compact mirror against the open doorframe. The tool caught the dim light through the opening, revealing an approaching guard. As the echoes from each footfall intensified, the young man eased the door shut while shoving the polished metal into a pocket. After the footfalls rose to a crescendo, he licked his lips and tracked the passing seconds with his extending fingers. When a fresh silence wrapped around him like a weighted blanket, he slipped through the doorway and resumed his search.

He paused at every doorframe, reading the placard until his fingertips traced the letters for the record room. His gaze swept down both sides of the corridor as he withdrew his lock picks and kneeled in front of the doorknob. He slid the tools into the lock, and with a few deft motions, teased the tumblers out of the cylinder and slithered inside the chamber as he pulled a flashlight from his pocket.

Instantly, a beam of light sliced through the darkness, illuminating the massive file cabinets filling the chamber. He inched closer, searching for the drawers dedicated to clients with m names. After a few seconds, he located the first one and tugged it free while he gripped the light with his teeth. He flipped through the markings, methodically working through the first few drawers. Halfway through the fourth one, his eyes widened as his fingers tightened around a folder.

He laid the file down as he withdrew a different packet from under his shirt. The young fellow flipped both files open and exchanged their contents. With a glance over his shoulder, he closed the folders. He shoved the original into the drawer while he tucked the liberated documents under his arm. With his prize collected, he marched over to the door, retrieving the mirror. After ensuring both sides of the hallway were vacant, he dashed through the halls and raced down the stairwell. He burst through the building’s exit and bolted to the car idling nearby. With a growing smile, he slipped into the vehicle and proffered the file to the woman sitting behind the driver’s seat.

“You know, based on how long you were up there, I figured you were making me a handwritten copy.”