Fresh off the heels of writing Weighing Pillage, I turned my attention to another favorite character, Darren Gilbert. While I’m detailing his early life over on WattPad, he was a character I created for my patrons with Act of Heroism. When I finished that story, I knew I had a character that I couldn’t ignore.

With every word, I’ve watched Darren grow from a timid young boy to a master yet disgruntled spell slinger. Despite knowing that I wanted to explore his life, I wasn’t sure what kind of story I would tell. Since these installments of Darren are exclusive to my patrons, I needed to come up with a tale that wouldn’t force fans following his life on Wattpad to become patrons. So after a little thought, I decided to pit my mage against the Hunters, a group dedicated to finding wizards who refuse to join their brethren.

As Darren meandered through the city, he ducked into an alley to soothe his neck with a simple spell, sending out a flare to every hunter…

So, pull up a chair and get comfortable as Darren sooths his weary body. 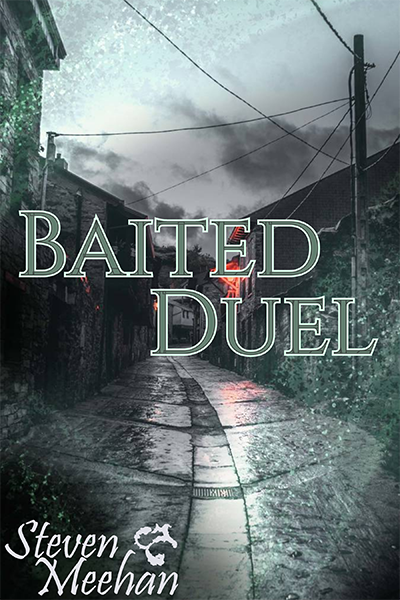 Darren cracked his knuckles as pale blue illumination oozed from his palm. As his chest rose and fell, the soft light condensed into droplets and rolled down his fingers. When the beads neared his fingertips, Darren pressed them against his neck, and they seeped into his body. Instantly, the taut muscles running up Darren’s spine slackened.

After a handful of heartbeats, the last bluish drop vanished. Darren pulled his fists under his chin and threw his elbows behind him. As his back realigned, his chest deflated while a corner of his mouth stretched toward his eye.

“For someone who isn’t a member of the ruling elite,” a stranger said as he strode into the alley, clicking his tongue. “You shouldn’t flaunt your disregard for their decrees.”

As Darren whirled to face the stranger, his stance widened while a greenish hue wrapped about his fingers. With a quick glance over his shoulder, Darren inched away from the newcomer and slipped the verdant hand behind his back. “I don’t know what you’re talking about, sir.”

Groaning, the stranger gripped the bridge of his nose. “Not only did I witness your previous spell, but you are currently preparing another. Do you really want to go down this route?”